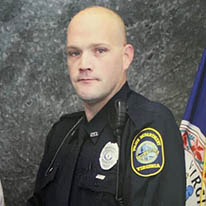 Michael “Moose” Wayne Whittaker, age 47 of Pulaski, passed away Tuesday morning, June 14, 2022 at Lewis Gale Medical Center in Salem. He was born in Radford on January, 18, 1975, and was the son of the late Patsy Jean Walker Whittaker and Gary Eugene Whittaker: grandmother; Nan & Pawpaw Howard Walker.

Moose was well known, having worked in the Carilion Police Force at New River Valley Medical Center for approximately 14 years. He left the Carilion force and transferred his career to the Dublin Police Department, where he learned to love the people of Dublin, and cherished his job. Moose succumbed to an on-the-job injury, which necessitated his retirement. He was a loving father, and a great friend to many.

A memorial service will be held on Monday, June 27, 2022 at 2:00 p.m. at Seagle Funeral Home, with Pastor Carson Linkous officiating. The family will receive friends one hour prior to the service at the funeral home.