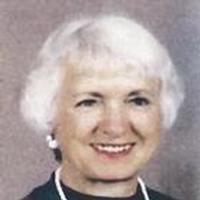 Jewell (Judy) Ballard Whitt passed away on Tuesday, November 13, 2012, after a short stay at Bowers Hospice House in Beckley, WVA. Previous to this she was lovingly cared for by her son in his Fayetteville home.

Prior to her progressive illness, Judy always cared for others, placing her church, family and friends before herself. Judy was born Jewell Fanning on March 13, 1927 in McDowell County, WVA, to Nancy Fife and Alfred Fanning. One of 7 children, she spent her early years in Iaeger, WV. Judy attended Concord College where she met the “love of her life”, Thomas E. Ballard Jr., when he walked into the “Sweet Shop” where she worked as a waitress. Judy and Tom were married November 26, 1946 and made their home in Peterstown, WVA.

In addition to teaching grade school at Glen Lyn, and later, Rich Creek, VA, she was mother to two children and wife of a high school coach—football, baseball and basketball. As she often told us, “Your dad promised I would always be first in his life, after ball.” Judy and Tom later taught at Narrows High School in VA. For years, the whole family drove to NHS together, where their son and daughter attended classes, Judy taught English and Remedial Reading and Tom taught Government. Both alternately pursued their Master’s Degrees at West Virginia University, during summers between school sessions. Judy later retired from Rich Creek Grade School where, she had returned as Principal.

Judy was widowed early in 1971 after 24 years of marriage. In 1978 she married widower, France Whitt, then of Pearisburg VA. Following many years as member of the Rich Creek Baptist Church, she joined France in his devotion and service to the Redeemer Lutheran Church in Pearisburg. Judy often laughingly described herself as a “LuBap”. In addition to service to their church, Judy and France enjoyed square-dancing and working on their expansive, riverfront farm. They eventually developed the farm into “River Bend” community homes and donated property bordering the New River to the city as a park.

During this time, Judy began writing poetry. Many friends were thrilled to have their church activities, weddings, travels, and such, memorialized in one of Judy’s poems. Her favorite, “How Could You, LORD”, was even set to music. She was also well known for her baking, especially her famous “country rolls” and peanut butter cookies, which she regularly shared with neighbors and “shut-in” church members.

Jewell Ballard Whitt was truly a loving and strong wife, mother and friend. Her belief in and love for Christ sustained her through the loss of two husbands, each of whom she cared for and protected in their final years. She is also predeceased by five brothers and her only sister. She will be missed by many.

Funeral services will be 12:00 Noon, Friday, November 16, 2012 at the Broyles-Shrewsbury Funeral Home Chapel with Rev. Fred Hodges officiating. Burial will follow in the Peterstown Cemetery, Giles County, VA. Friends may call one hour prior to the services at the funeral home.

Online guestbook can be signed or condolences may be sent to the Whitt family at www.broyles-shrewsbury.com. Arrangements by Broyles-Shrewsbury Funeral Home, Peterstown, WV.