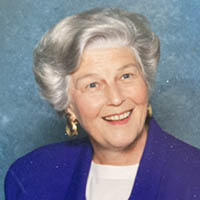 Jeanne DeFord Bailey Whitman civic leader, educator, community volunteer, mother and grandmother died on Dec. 2, 2020 in Harrisonberg, VA. She was devoted to her community and home in Pulaski, VA, where she spent over 60 years of her life. Her husband, Robert P. Whitman, Sr. predeceased her in 1993.

She was a lifelong member of the First Presbyterian Church in Pulaski and enjoyed deep and lasting friendships and associations there.

Jeanne was born on July 18, 1930 in Cumberland, VA to Otway Giles and Ella DeFord Bailey. As a girl she moved with her family for her father’s work to Abington, VA where she graduated from Wallace High School at the age of 16. She graduated from Madison College, now James Madison University, and moved to Pulaski with two Madison College classmates to teach at Pulaski High School. She later earned a Master’s Degree in education from Radford University.

In Pulaski she met and married Robert P. (Bob) Whitman. Jeanne resumed her professional career shortly after the birth of their third child and moved rapidly through a series of administrative posts in the Pulaski County School system, becoming in time Principal of Northwood Elementary School and then Assistant Principal at Critzer Elementary School. In 1971 she retired from her position at Critzer Elementary and devoted her time to volunteer and civic work.

She served on the Pulaski County School Board before her administrative employment in the system and served on the following boards, among others, across the years: New River Community College for which she had a deep affection and appreciation as a vital service to area students; Randolph House and the Randolph House Foundation, Pulaski County Library, New River Rails to Trails and Sovran Bank. She served as an Elder of the First Presbyterian Church and volunteered for Daily Bread and Wonderful Wednesdays.

Jeanne cared for friends whose circumstances left them alone and lonely, taking food and visiting regularly. For a number of years she traveled widely with her sister and with local friends. She joined in projects for the betterment od Southwest VA and for Pulaski County. She loved her dogs and her life on the farm, where she remained independent and capable until an injury in 2016 then moving to Harrisonburg near her youngest child, Sarah.

Besides her husband, Jeanne was predeceased by her sister, Ellen Bailey Giannini and her brother, O. G. Bailey, Jr. as well as two nephews, Stephen Giannini and David Giannini. She is survived by her children, Robert P. Whitman and his wife Elizabeth, Jeanne Whitman Bobbitt and her husband Rhodes and Sarah Whitman Hadacek and her husband Dan. She is also survived by four grandchildren, John DeFord Whitman, Julia Pierce Whitman, James Bailey Hadacek and Samuel Gaston Hadacek as well as a nephew, Giles Giannini (Rhonda) and nieces Anna Bailey Michael (Jeff) and Barbara Bailey. She is also survived by her cousin and “fourth child” Bentley Robinson Andrews and her sons Hunter Perrot (Karen) and Cabel Perrot.

Graveside services will be held at 2 PM Sunday Dec. 6th from the Thornspring Cemetery, Pulaski County, with the Rev. Melissa McNair-King officiating. Arrangements are by Stevens Funeral Home, Pulaski, VA.