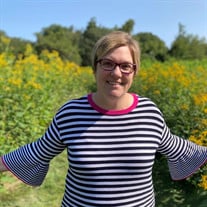 In lieu of flowers memorial contribution may be made to the Relay for Life of The New River Valley.