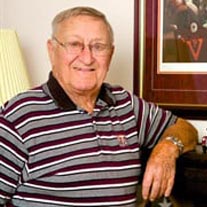 Charles Kyle Whitescarver, Jr., kindly known to all as Dub, passed away June 1, 2022. He was born on November 2, 1924 in Davy, West Virginia. He lived his life in Roanoke, Smith Mountain Lake, Riner, sometimes in Venice, Florida, and lately at the Showalter Center at Warm Hearth in Blacksburg.

Family will receive visitors at Horne Funeral Home in Christiansburg, Saturday, June 4, at 10:00 am with a Service following at 11:00 am. The Service will be officiated by Pastor Don Shelor.

Dub was a professional engineer with Sowers, Rhodes and Whitescarver, then Whitescarver, Rhodes and Associates, and then with Whitescarver, Hurd and Obenchain. He served as President of Virginia CEC and earned many accolades in his profession. Hospitals, schools, and other public buildings he helped design are all across Virginia.

He served in the Army Air Force during World War II. After the war he attended Virginia Tech and studied engineering, following the path of his father, Charles Kyle Whitescarver, Sr. who founded Whitescarver Engineering in Roanoke. While at Virginia Tech he was part of the cheerleading squad and was fond of saying he stood on the top of the stoplight in the middle of College and Main Street to lead cheers.

He never lost his passion for Virginia Tech and was the President of the Franklin County Hokie Club, a Golden Hokie, and a Hokie Rep. He held season tickets to Lane Stadium and Cassell Coliseum from the first year they opened until his health prevented him from attending. While living at Showalter he was seldom not wearing Hokie clothing.

In lieu of flowers you may make a donation to the Warm Hearth Foundation. He was wise in knowing when to move to Warm Hearth where he received excellent and loving care until his last day.