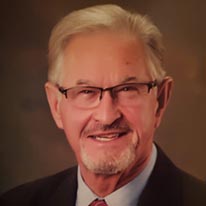 Besides his parents, he was also preceded in death by his first wife, Peggy Jane O’Dell White; and brothers, Donald Richard White and Jimmy Elwood White.

Jerry was a loving husband, father and Paw Paw. He worked at Jefferson Mills 1965-1991 and BBA/TMD Friction 1991-2010 in management and was able to travel to numerous countries to learn and enjoy the various cultures. He was an active member of First United Methodist Church in Pulaski. Jerry was elected to serve as a member of the Board of Supervisors in 1988 and served on the Board from January 1, 1988 through December 31, 1999. While on the board, Jerry was elected Vice-Chairman and Chairman. During his tenure on the Board of Supervisors, Jerry led the county in the areas of economic development by acquiring and expanding three county industrial parks. He also supported the formation of the Virginia’s First Regional Industrial Facilities Authority and was instrumental in the restoration, renovation, expansion and modernization of the Historic Pulaski County Old Courthouse following the devastating fire in 1989.

Jerry also was a steering committee member of Pulaski Encouraging Progress (PEP) and he served as Vice-Chairman and Chairman of the New River Resource Authority. After his service on the Board of Supervisors, Jerry served as a member of the Pulaski County Public Service Authority Board of Directors from January 2010 through August 2011.

He had a love and passion for motorcycles and absolutely loved his time on many rides with his dear motorcycle friends. He enjoyed watching Cougar basketball and Cougar football and enjoyed traveling and spending time with family and friends. Jerry also served in the United States Army National Guard.

Funeral services will be held on Saturday, June 5, 2021, at 3 p.m. from the First United Methodist Church, Pulaski, with the Rev. Will Shelton officiating. Burial will follow in Thornspring Cemetery with Pulaski VFW Post #1184 conducting the military graveside rites. Visiting will be held at the church where the family will receive friends from 12 p.m. until the service hour.