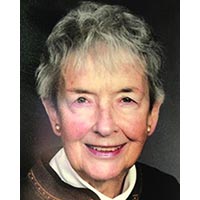 Lawrence and Permelia (Northey) Sorrels welcomed a daughter Dorothy Elizabeth on February 2, 1936. The middle child of five, she had three brothers and a younger sister, who passed at a young age. Growing up in Gilkey, N.C. on the family farm, Dot loved being a country girl, but did not like the work associated with farm life. Being surrounded by three brothers, she quickly learned to be a strong and independent gal. Dot attended grade school and later graduated from Rutherfordton-Spindale Central High School.

Dot’s first job was working for Mr. Reed, at the local jewelry store for several years. After getting married, she was fortunate to attend Radford College, in Radford, Va. which was a teacher’s college. Dot earned a bachelor’s degree and eventually a master’s degree in Librarian Science, all the while raising her children. For many decades, Dot flourished as a librarian. She ran a tight ship and took great pride in every book on her shelves. Dot loved being with the children and was grateful to be able nurture generations of students.

Dot loved to dance. While attending a local dancehall, she saw a handsome young man across the floor and knew he was the one. Dot married Mack Lee Whitaker on October 13, 1956, at Gilkey Methodist Church. They eventually settled down in Radford, Va., where Dot and Mack raised two sons, David, and Kevin. Dot relished being a wife and mother. As a family, they enjoyed the summer camping vacations, especially to Myrtle Beach. If you had asked Dot, it was not much of a vacation for her, because she still needed to do most of the cooking. Dot was most content be surrounded by her boys and husband. She did what they enjoyed doing; particularly eating seafood and watching James Bond movies.

Being a librarian, Dot had a strong passion for reading. She was an excellent seamstress, even sewing her wedding dress. Dot enjoyed planting wildflowers and loved music. She enjoyed participating in the Floyd United Methodist Church choir and in a local quartet for the Lion’s Club. Dot liked volunteering at Angels in the Attic Thrift Store. After Dot and Mack retired, they enjoyed the quiet life living in a retirement community and making new friendships. Especially after Mack passed, these friendships helped her thrive in life.

Dot lived a simple life and needed only the love from her family. Dot was a wonderful wife, mother, and nana, who always put their needs first. She loved being a grandma. Dot remained connected with the grandchildren and looked forward in seeing them, at the annual visits. Being surrounded by men most of her life, Dot did things her way! Underneath that strong shell, she was kind, easy going and intelligent.