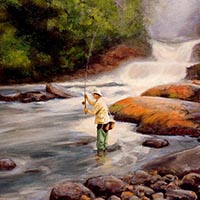 Robert (Jinks) Gerald Wheeler, 75 of Narrows, VA went to be with the Lord on Monday, November 19, 2018 at Carilion Giles Community Hospital in Pearisburg. Mr. Wheeler was born on January 10, 1943 in Narrows and was a son of the late Egbert Terrell Wheeler and Ethel Lee Wilburn Wheeler. Besides his parents, he was preceded in death by four brothers, Perry, Randell, Allen, Virgil Wheeler and two sisters, Marie Conley and Georgia Turner.

Mr. Wheeler was a retired employee of the Celanese Corp. in Narrows with 21 years of service, a lifetime member of the NRA, a NASCAR fan and football fan. He was an avid outdoorsman, enjoying hunting and fishing. He loved his God and his church, Kathleen Memorial United Methodist Church in Narrows.

He is survived by his wife of 39 years, Anna Shrewsberry Wheeler of Narrows, five brothers, Bill and Mary Wheeler, Curtis and Juanita Wheeler, Harold and Judy Wheeler, Danny and Patricia Buckland all of Narrows, and Roger and Carmen of Pearisburg and two sisters, Shirley and Roy Parcell of Narrows, Carol Layman of Narrows and numerous nieces and nephews and his little buddy, “Harry” his dog.

Funeral services will be conducted Saturday, November 24, 2018 at 1pm at the Riffe – Givens Funeral Chapel in Narrows with the Rev. W.R. Johnston officiating with burial following in the Wheeler Family cemetery in Narrows, VA.

The family will receive friends at the funeral home Friday evening from 6 – 8pm. Memorial donations may be made to the Kathleen Memorial United Methodist Church in Narrows. The family is being served by Riffe – Givens Funeral Service in Narrows, (540) 726-2442, and online at riffefuneralservice.com.