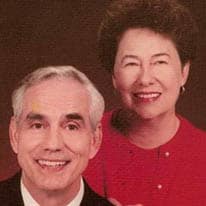 Franklin Delano West, 87, of Salem, entered the Gates of Heaven on Tuesday, October 19, 2021. His Christian faith was the core of all he was, and he lived his life for God and inspired his family to do the same. He had been a member of Salem Baptist Church since 1965 where he served in many ways to include Sunday School teacher, a ministry sharing the Gospel with inmates at the Salem jail, and as a church deacon. He was a devoted and loving husband, father, grandfather, great-grandfather, brother, uncle, and friend.

Frank was born in Check, Va., on June 11, 1934, to Terry Samuel and Ima (Saunders) West. The youngest child of six, affectionately known as “Frankie D.” as a child, he lived in Check, Va., where his parents ran a store. He spent a lot of time with his paternal grandparents especially after a tragic heart attack took the life of his father in 1937 when Frank was only three years old. His father’s parents and siblings helped raise him, his brothers, Terry, John William, and Richard, and sisters, Eura and Mary Alice, leading to his very close relationships with his uncle, John Grover West and five aunts, Mary, Erma, Alice, Willie, and Dolly on a farm in Floyd County that they affectionately called Westwood.

Frank attended Check Elementary School until the family moved to Salem and he graduated from Andrew Lewis High School in 1952. As a college student at Carson Newman in Jefferson City, Tennessee, he met the beautiful Miss Jenny Helton who he made his wife on June 30, 1956. The newlyweds moved to Richmond, Va., where Jenny got her first teaching job and Frank began a Social Work graduate program at William and Mary University. Their son Mark was born in Richmond in October of 1957. Upon completion of his master’s in social work, Frank quickly found a job at the Salem Veterans Medical Center where he worked for over 35 years while Jenny taught third grade in the Salem area. In November 1963, they completed their family with son David. Frank retired in 1992 as the Chief of the Social Work Department at the Salem VA Medical Center.

A chapel funeral service will be held on Sunday, October 24, 2021, at John M. Oakey & Son Funeral Home in Salem, with visitation from 1 until 2:30 p.m., the service will begin at 2:30 p.m. Frank will be laid to rest during a private family committal service in the West Family Cemetery in Floyd, immediately following the chapel service.

The family would like to extend their heartfelt thanks to the members of the Visiting Angels, Medi Home Health and Hospice, and the many compassionate caregivers who touched Frank’s life at a difficult time.

In lieu of flowers, memorial donations can be made to the Alzheimer’s Association, act.alz.org.

Online condolences can be made by visiting the funeral home’s website, www.johnmoakey.com.