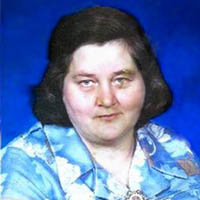 Cennie Elizabeth “Liz” McFall Welch, age 71 of Pulaski, died Friday evening March 17, 2006 in Montgomery Regional Hospital. Born December 15, 1934 in Pulaski, she was the daughter of the late Lillian Tolbert McFall and Silas McFall. In addition to her parents she was preceded in death by a brother and a sister. She was a member of the Bob White Blvd. Church of God. She is survived by 2 sons: Steven Wayne Welch & John Preston Welch both of Pulaski: 2 daughters; Deborah (Debbie) Kay Welch Guynn of Pulaski, & Anita Carolyn Welch Cole of Draper: 2 brothers; Carlos McFall and Samuel (Sam) McFall both of Pulaski: 1 sister; Mary McFall Dean of Pulaski. Also survived by 5 grandchildren & 1 great grandchild. Funeral services will be held Monday March 20, 2006 at 2:00 p.m. at Thomas M. Seagle & Sons.