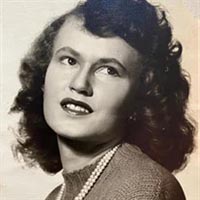 Halline Marie Weddle, 95, of Forest, passed away peacefully in her home on July 9, 2020 with family members by her side. Known as Marie, she was the loving wife of J.C. Weddle for 69 years before he passed away in 2014.

She was born in Christiansburg on May 30, 1925. She was the daughter of the late Taylor J. Huffman and Gracie T. Huffman. She leaves her memory to be cherished by son, James Cleve Weddle Jr. and wife Brenda of Narrows and her daughter Patricia Rony and husband Karl of Forest. Her grandchildren are James Cleve Weddle III and wife Becky, Andrea Weddle, Dylan Weddle, Makayla Puzio and husband Christopher, and Jason Rony. Her great-grandchildren are Whitney Dunbar and husband Jacob, Henry Hall and Kelsey, Luke Hall and Barrett, Clay Weddle and wife Casey, and Seneca Bower. Her great-great grandchildren are Elijah and McKenzie Dunbar, Colton and Emberly Weddle, and Beau Hall. Also included are her niece Connie Obenchain and nephew Robert Huffman. Marie’s memory will live on in the hearts of many other friends and relatives as well.

Marie served her country during WWII with the Hampton Roads Port of Embarkation. As a young, married couple, Marie and JC were award winning archers. Marie was a true southern lady. She was kind, gracious, and hospitable. She prepared and served many meals to family and friends. Even when she could not take care of herself, she still wanted to make sure others had a good meal available.

Marie moves on to her heavenly home to join her husband.