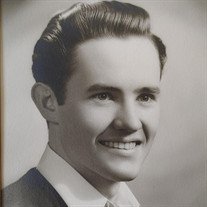 Ryland Edwin Webb 1932-2021 Born and raised in Angola, he leaves a small part of his heart in Africa. The rest of his heart belonged to Wanda Sue, his wife of 60 years. He was her Clark Gable. To see them dance together was like watching an old Hollywood movie. With unspoken choreography, they often danced together for no apparent reason.

Whether telling bedtime stories of Africa to Stanley, Linda and Susan or a generation later telling embellished versions to Parker, Ellery, Rachel, Kevin, Megan and Zach, family came first…Unless of course Walter Cronkite was on.

Dad told slightly inappropriate jokes, snuck candy to grandkids and could never get enough banana pudding, He was a Professor Emeritus at Virginia Tech, a master gardener, a Korean War veteran and an expert carver of all roasts, turkeys and pumpkins. He was a practical man of science with a tender spot for babies. Most recently, his great grandson, Salem.

He was a humble man and threatened consequential haunting if his accomplishments were listed here. But his time spent in Haiti is a source of great pride for us. Dad’s collaborations with the Haitian Bureau of Nutrition to prevent preschool malnutrition are an amazing humanitarian contribution and cannot go unmentioned.

Food was important to Dad. Whether in his research or at his kitchen table, food was central. With that in mind, in lieu of flowers please make donations to your local food banks and think of him whenever you eat chocolate covered peanuts or pork rinds.