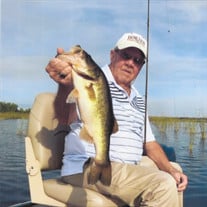 He was surrounded by his family. He enjoyed spending time fishing.

A memorial service will be conducted at a later date.