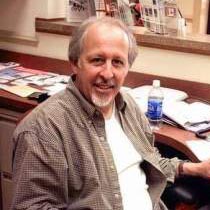 Steven Douglas Watson died peacefully at Highland Ridge Nursing and Rehab on March 19, 2020 in Dublin, VA at the age of 69.

His children remember him as a passionate father who encouraged them to pursue their goals. Steve was accomplished at fishing and playing guitar and played publicly with The Fisherman Four during his years in high school in Springfield, OH. He also would proudly tell of his many fishing expeditions and near catches of fish “this big”.

The family would like to thank Highland Ridge Nursing and Rehab and Carilion New River Valley Medical Center for their efforts, care and loving kindness.

In lieu of flowers, please remember Steve fondly in your thoughts.

Funeral services will be private. Online condolences may be sent to the family by visiting www.seaglefuneralhome.com Arrangements by Seagle Funeral Home, Pulaski.