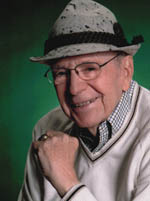 Thornton Garland Wampler, affectionately known as Corky, retired vice president and secretary of Pulaski Furniture Corp., and former co-owner of Wampler Pharmacy Inc. in Martinsville, died peacefully Oct. 27, 2013, at his home in Pulaski, VA. He was 88. The son of Agnes Mae Hale and Wythe Fielder Wampler, he grew up in Galax until entering the College of William and Mary in September 1942. In October 1943, he joined the Army Air Corps and graduated from the Aviation Cadet Corps. He received his wings in December 1944. After serving in the 3rd Air Force Command during World War II, he was honorably discharged in 1946. In 1948, he graduated from his beloved College of William and Mary, where two of his daughters, two grandsons, a son-in-law and granddaughter-in-law also graduated. He was an avid member of Kappa Alpha Fraternity, serving as its president from 1947-1948. He also served on the Educational Foundation of William and Mary for many years. He lived in Martinsville where he co-owned Wampler Pharmacy Inc. and was active in civic affairs. He was named Outstanding Young Man of the Year in 1956 and served on the Martinsville City School Board for 13 years before moving in 1969 to Pulaski, where he was vice president and secretary of Pulaski Furniture Corporation until his retirement in 1993. A lifelong Methodist, Mr. Wampler was very active in both the Martinsville First United Methodist and Pulaski First United Methodist churches. A lover of music, he sang for more than 40 years in chancel choirs where he performed solo work, and sang at many weddings throughout the state. He was on the board of Pulaski Community Hospital and served as its chairman in 1989. He was a Mason and a member of the Kazim Temple. Mr. Wampler was an Eagle Scout and a lifelong supporter of the Boy Scouts of America. His beloved wife, Winifred Gochenour Wampler, preceded him in death in 1998, as did his daughter, Cathleen Wampler Mora in 2003, and two brothers, Graves Wampler and Elbert Wampler. He is survived by his daughters and their husbands: Janice Wampler Booker and Armistead Page Booker, Jr., of Pulaski, VA; Louise Wampler Garrison and Richard Arthur Garrison, of Greensboro, NC; six grandsons and their families: Brenner Boyd and Kelly, of Raleigh, NC; Ryan Thornton Boyd and Amy, of St. Petersburg, FL; Armistead Booker and Elisa, of Brooklyn, NY; and David Thornton Booker and his fiancée, Caroline Warburton, of Manhattan, KS; Corey Garrison, of Cincinnati, OH ; and Taylor Garrison, of New York, NY; four great-granddaughters, Sarah, Devon, Alexandra, and Skylar; a great-grandson Cole Thornton; a sister, Kathleen Rollins, of Blacksburg, VA; and a brother, Bernard Wampler, of Pulaski, VA. He is also survived by many nieces and nephews, all of whom he dearly loved. A special thank you to his loving caregivers, Debbie, Jo Ann, Pam, Valerie and Zetta, his caring physician, Dr. John Knarr, and his buddy Daniel. A graveside service will be held at 1 p.m. Wednesday Oct. 30, 2013, at Draper Valley Presbyterian Church, Draper, VA, with a celebration of life service at 3 p.m. at Pulaski First United Methodist Church. Family will receive friends in the Family Life Center following the service. Memorial contributions may be made to the First United Methodist Church Memorial Fund, 135 4th St. NW, Pulaski, VA 24301-4523. Online condolences may be sent to the family by visiting www.seaglefuneralhome.com Arrangements by Seagle Funeral Home, Pulaski VA.