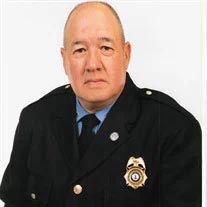 Kelly Brice Walters, born September 16, 1936 in Rogers, Virginia. Son of the late Vada McGuire and George M. Walters Jr. He is Preceded in death by his wife, Virginia Gerald Walters.

Kelly was a member of the Christiansburg Lifesaving and First Aid Crew, later known as Christiansburg rescue squad since 1964. Kelly served as Captain, 1st and 2nd Lieutenant, Treasurer, and President of the Board of Directors.He was instrumental in starting Floyd County Rescue.

He was the District 7 VAVRS rescue squad Vice President on two different occasions. He was a member if the first “Rescue College” Committee, which is now on its fortieth year. He served on the Highway Safety Commission. Was past a President of the Virginia Association of Volunteer Rescue Squads (VAVRS). Served as President of VAVRS, a life member, and a member of the “Hall of Fame”. Kelly served as a Charter/Life member of Riner Volunteer Rescue Squad. An organization that he was also very instrumental in establishing.

Kelly was a member of Christiansburg Hunting Club and served them as President and a member of the Board of Directors. Kelly had hunting dogs for years and was faithful to the club in seeing their needs were met in many ways.

Kelly began his work life at the Blue Ridge Overall Factory for 4 years, He then worked for Cromer Furniture in Christiansburg for 3 years, before becoming the caretaker of the Cemetery Cooperation where he spent 24 years. After leaving the Cemetery Corporation, Kelly went to work for Montgomery County and served the next 18 years as an Animal Control Officer. Upon retirement from the county Kelly became the first full time paid Rescue Squad Captain for Christiansburg. Kelly served the squad, the town of Christiansburg and county of Montgomery in that capacity for 10 years. Kelly was dedicated to the squad and community and always went the extra mile for those he served. The family would like to thank English Meadows Blacksburg Campus for their care since February.

Funeral Services will be held Wednesday December 30, 2020 at 11:00 am in the Auburn Baptist Church with Neal Turner presiding the family will receive friends Wednesday, from 9:30 am until service time at the church. Comital will be in the Sunset Cemetery in Christiansburg.