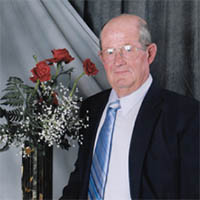 Clifton William Walters, 83, passed away in his home, surrounded by family and friends on November 2, 2019. Clifton was a lifelong resident of Ellett Valley in Blacksburg, Virginia.

He retired from the US Postal Service and dairy farming but never left the farming life. He loved working in the hay fields and with beef cattle. He passed his love for farming onto his children who will carry on this legacy. He enjoyed cruises, large family gatherings, and winning in backyard games. Annual beach vacations were filled with card games, fishing, and quality time with family. Clifton was a member of St. Michael’s Lutheran Church. He was a big fan of the New York Yankees, Virginia Tech sports, Blacksburg Indians and enjoyed his years on the bowling circuit. He had a catching sense of humor and his laughter was contagious. He is proceeded in death by his parents, Lacie and Irene Walters.

The family would like to thank the nursing staff, especially the PCU of LewisGale Hospital Montgomery for their compassionate care provided during his most recent stay.

In lieu of flowers the family asks that donations be made to Micah’s Backpack in the care of St. Michael’s Lutheran Church.