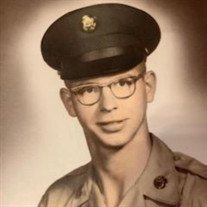 Samuel Marvin Wall, 73 of Blacksburg went to meet his heavenly father on February 16, 2021 at Montgomery Regional Hospital. He was born in Roanoke, Virginia on June 21, 1947 to the late Samuel Harding Wall and Kathleen Edna Wall. He was preceded in death by his father, mother, and his eldest sister, Phyllis Mae Peachey of Blacksburg, Virginia.

Marvin was a United States Veteran who served three years in Germany and he was a retiree of Moog Components group. Marvin was a member of North Fork Baptist Church in Blacksburg, Virginia where he served as deacon, Sunday school teacher, Sunday school superintendent, and a member of the choir. He was a loving man who devoted his life to serving the Lord, caring for his family and cultivating his family farm in Catawba Valley.

A graveside funeral service will be conducted on Sunday, February 21, 2021 at 2 p.m. at Westview Cemetery with pastor Danny Collins officiating.