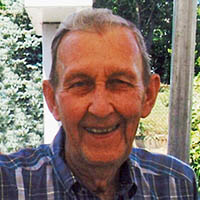 James Royal Wall, age 90, passed away on Tuesday, December 15, 2020, at the Carilion Giles Community Hospital in Pearisburg, VA. Born June 20, 1930, in Glen Lyn, VA, he was the son of the late Luther William and Florence Edith Smith Wall.

James was a graduate of the 1950 Princeton High School Class. While attending high school, he played on the basketball team, where he helped lead them to winning the 1948 state championship. He was employed by North American Rockwell for eleven and a half years, and later retired from Norfolk Southern Railroad in 1995 after 28 years of service. He was a member of the Lord’s Church and attended the Peterstown Christian Church for worship and fellowship with those of like precious faith. Additionally, James was a charter member of Appalachian Highlands Music Association. His favorite hobbies included gardening and bluegrass music.

Funeral services will be held at 2:00PM on Saturday, December 19, 2020, at the Broyles-Shrewsbury Funeral Home Chapel in Peterstown, WV, with Minister Donald Henegar and Pastor Terry Kornegay officiating. Visitation will be from 1:00PM until time of services on Saturday at the funeral home. Private burial will take place at Roselawn Memorial Gardens in Princeton, WV.

Due to the regulations associated with COVID-19 and the WV Governor’s Mandate, those attending the visitation and funeral services shall wear a mask and practice social distancing. Online guestbook can be signed or condolences may be sent to the family at www.broyles-shrewsbury.com. Arrangements by Broyles-Shrewsbury Funeral Home, Peterstown, WV.