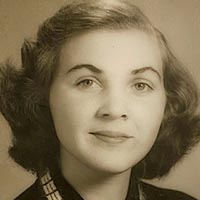 Charlotte Ann (Owens) Walker, 83, of Pearisburg, died on Friday, October 2, after a short illness. Charlotte was born on August 15, 1937 in Princeton, West Virginia.

She was preceded in death by her parents Viola (Pritchett) Owens and Edmund Owens. She is survived by her sister Freddie J. Walker and family, by her husband Donald Walker of Pearisburg, her son Michael Walker of Innishannon, Ireland, daughter Pamela Walker Mathews of Bel Air, Maryland, daughter Patti Walker Crothers and granddaughters Lindsay Eryn and Alaina Rose Crothers of Mt Pleasant, South Carolina.

Charlotte was salutatorian of her high school class in Princeton and valedictorian of the 1958 nursing class at Lewis Gale Hospital Nurses College in Roanoke. She married her high school sweetheart, Don, who was a pharmacy student at West Virginia University. After living and working as an registered nurse for a few years in Morgantown, West Virginia, she settled with Don first in Princeton and then, in 1961, moved to Pearisburg, where their children were born and brought up and where they owned and operated McLean Drug Store for many years.

They were active members of the Pearisburg Presbyterian Church for more than 30 years. Following Don’s retirement in 1994, the couple moved to Smith Mountain Lake, where they were again active in the local church. They returned to Pearisburg in 2017, where they lived since.

Charlotte exemplified the precepts of kindness and charity towards all. She volunteered as a meals on wheels provider, served for decades in the women of the church, taught Sunday school, assisted with youth groups and helped to organize vacation bible school, sang in the church choirs of all the churches she ever attended, led Girl Scout troops in Giles County, served as a regional leader in southwestern Virginia Girl Scouts for many years, was active in the Notables singing group at Smith Mountain Lake and served as a volunteer with Lake Christian Ministries at Moneta.

Charlotte was strongly devoted to her family, friends and animal companions. She was unfailingly generous with her time and was quiet and modest to a fault. She loved music and singing and had a tune for every occasion. Charlotte typified the deeply devout, but quiet Christian, someone who did not speak of her faith but rather testified to her beliefs through kind and loving actions towards others, as exemplified in the hymn text: “But in thy life the law appears, drawn out in living characters”.

Funeral services will be conducted Thursday, October 8, 2020 at 11am at Pearisburg Presbyterian Church with the Rev. Steve Darr Officiating. The family will be receiving friends at the Givens Funeral Home on Wednesday from 6 – 8 pm. We will be observing phase 3 Covid-19 precautions. Please wear a mask and adhere to social distancing.