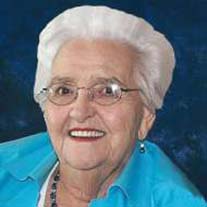 For 94 years our world was gifted by the presence of Marie Franklin Waldron. On Friday, June 24, 2016, she joined those of her loved ones who had gone before her into her Savior’s heaven.

Preceding her were her husband of 69 years, Goode S. Waldron; two of her sons, Ivan Herlin and Ronald Wayne Waldron; a beloved daughter-in law, June Sanders Waldron; and a grandson, Robert Dean Waldron.

Born in Pembroke, VA, on April 9, 1922, she was woman of a gracious and gentle spirit, a keen intellect, and a loving heart. She devoted her life to loving and nurturing her family of four sons and four daughters, eight grandchildren, and nine great grandchildren. She gave her friendship lavishly and her time generously. There were many faithful years of volunteer work at Pembroke Christian Church as member and president of CWF,with Giles County Senior Citizens, and in Senior Olympics. She was a quilter, a craftswoman, a reader, a lover of nature, and a champion of children.

The family will receive visitors on Wednesday, June 29, from 12:00 noon to 2:00 at Riverview Baptist Church, 219 Big Stony Creek Road, Ripplemead, VA 24150. Funeral services, officiated by Rev. Shahn Wilburn, will take place immediately following with internment at Birchlawn Cemetery in Pearisburg. The Kendall Funeral Home, 605 Snidow St in Pembroke is in charge of the arrangements. Online condolences may be sent by visiting kendallfuneralhome.com.