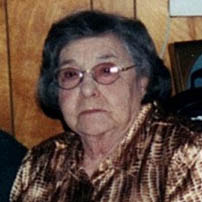 Evelyn Florine Waddell, 95, of Pearisburg, VA went to be with the Lord on Monday, April 16, 2018 at Giles Community Hospital in Pearisburg.

Mrs. Waddell was born on October 5, 1922 in Bluefield, WV and was a daughter of the late Everett N. Waddell and Mamie Townly Waddell. Besides her parents, she was preceded in death by two sisters, Dorothy W. Lane and Elizabeth W. Ganoe.

Mrs. Waddell was a retired employee of the Celanese Corp. in Narrows, an avid bingo player and loved taking her neighborhood walks.

She is survived by one sister, Naomi W. Kesling of Lakeland, FL, one aunt, Mary Butler of Pearisburg, numerous nieces and nephews and special caregivers, Doug and Panzie Whittaker of Pearisburg.

Funeral services will be conducted Wednesday, April 18, 2018 at 11:00 am at the Givens Funeral Chapel in Pearisburg with the Rev. Dr. Fred L. Austin officiating with burial following in the Birchlawn Burial Park in Pearisburg. The family will receive friends at the funeral home one hour before the service. Online condolences can be sent to the family at givensfuneralhome.com.