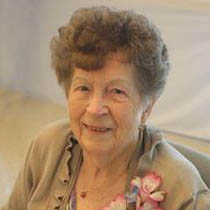 Doris Webb Vordo, age 93 of Pulaski, died Monday, April 11, 2016 at Lewis Gale Hospital Pulaski. She was born on July 22, 1922 in Pulaski, and was one of ten children of the late Lula Ogle Webb and Bennie Oscar Webb. She was a member of the St. Edwards Catholic Church in Pulaski.

In addition to her parents, she was preceded in death by her husband, Stephen Edward Vordo, 3 sisters, and 5 brothers. She is survived by her son; S. Michael Vordo, and his wife Ruth Roseberry Vordo of Christiansburg, three daughters; Doris Joanne Vordo of Panama City, Florida, Mary Frances Miller and her husband Nelson of Old Hickory, TN, Teresa Ellen Yarbrough and her husband Bob of Mechanicsville, VA, and a brother, James Edward Webb of Fairlawn. She is also survived by four Grandchildren; Stephanie Miller Kinsey and her husband David of Tempe, AZ, Heather Miller Taylor and her husband Michael of Portsmouth, VA, Jonathan T. Yarbrough and his wife Krystle of Mechanicsville, VA, and Melissa Holly Lawson of Kennesaw, GA, as well as 11 Great Grandchildren, and many nieces and nephews.

A Memorial Mass will be held at 11:00 AM on Saturday, April 23, 2016, at St. Edwards Catholic Church Pulaski, followed by a brief private internment.

The family would like to express their deep appreciation to Dr. Ajay Acharya, and to Judy Trivett, her Caregiver and friend, for the care and support they have shown our Mother over the years.

In lieu of flowers, the family asks for donations to the American Heart Association, or to St. Edwards Catholic Church. Doris and her husband Steve, were founding members of St. Edwards. The family also wishes to thank all the parishioners over the many years for their love and support.

Online condolences may be sent to the family by visiting www.seaglefuneralhome.com. Arrangements by Seagle Funeral Home, Pulaski. 540-980-1700