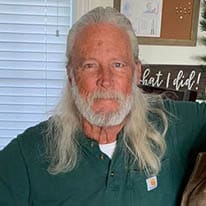 John Michael Victory, beloved father and grandfather, died suddenly at his home in Blacksburg, Virginia on February 15, 2022 from natural causes. He was 63 years old.

John is survived and mourned by his three children; Danielle and Travis Higgs, Andrew and Vivian Victory, Eric and Paige Victory, along with six grandchildren; Isaiah, Virginia, Riley, Harrison, Penny, and Evelyn as well as one on the way, Eliza. Also cherishing his memory is his mother Chris Nowak, and two beloved sisters, Linda Chaplain and Karen McGee. John was preceded in death by his father and stepmother, William and Lena Victory.

Born and raised in Colorado Springs, CO, John served as a professional meat cutter at King Soopers for 17 years. He was married from 1983-2002 to Karen Cofer. After having three children, together, they moved to Pearisburg, Virginia in 1993. John continued his career as a meat cutter locally while becoming a certified truck driver and continued working as a truck driver serving Riverbend Nursery and others until his sudden death. John loved his family, and was a dedicated father.

John touched many lives; playing basketball every weekend with family and church members, helping out with church youth programs, and playing Texas hold‘em nights with his trucking friends just to name a few. John was the person that friends or family could count on for late night phone calls when they had problems or concerns, always answering his phone.

A public memorial service will be held at Sinkland Farms, 3020 Riner Rd, Christiansburg, VA at 3pm on Saturday, February the 26th.