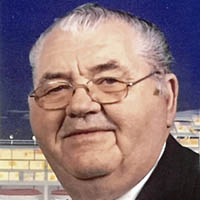 Jack retired from the Monroe County school system in 2004; he worked as a Barber in Peterstown for 50 years, was an auctioneer, a Real Estate Broker and he owned and operated a sawmill for many years. He was a member of the Cashmere Baptist Church.

In addition to his parents he was preceded in death by his first wife Beulah J. McDaniel Via after 36 years of marriage; two sisters, Jenny Sadler and Virginia Via; four brothers, Henry, Richard, Nathan, and Charles Via.

Funeral services will be 11:00 AM, Tuesday, October 18, 2016 at the Broyles-Shrewsbury Funeral Home Chapel, Peterstown, WV, with Pastor Walt Bonnell, Rev. John Offenberger, and Pastor Joe Spencer officiating. Burial will follow at the Pine Grove Memorial Gardens Cemetery, Lindside, WV. Friends may call from 6:00 pm until 9:00 PM, Monday October 17, 2016 at the funeral home. Online guest book can be signed or condolences sent to the family at www.broyles-shrewsbury.com. Arrangements by Broyles-Shrewsbury Funeral Home, Peterstown, WV.