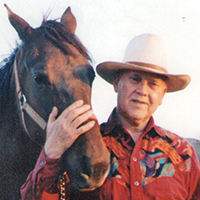 Donald Via aka Cowboy Jack, 87, passed away on Saturday 13th of March, 2021 in Kernersville, NC. He was born November 10th, 1933 in Pulaski, VA. He was the son of late Robert James Via and Hazel Kane Via.

He was married to late Shirley Shomaker Via for 60 years. Cowboy Jack was a member of First Christian Church and a lifetime member of the NRV Horse Association. He worked for Xaloy and retired after 38 years of service.

He is survived by son, Perry Via and wife Joann Via of Kernersville, NC. Three sisters: Marie Keesling of Roxboro, NC; Betty Bratton of Coshocton, Ohio, Bonnie Matherly of Colonial Beach, Va and brother Herman Via of Tucson, Az. Cowboy Jack was preceded in death by his brother Doug Via of Pulaski and sister Doris Via of Colonial Beach, Va. Four grandchildren and two great grandchildren.

In lieu of flowers, donations may be sent to NRV Horse Association PO BOX 521, Dublin, Va 24084. Memorial service is not scheduled now due to COVID-19. The memorial service will be announced in the newspaper. Family, friends, neighbors, his church and NRVHA will be notified.