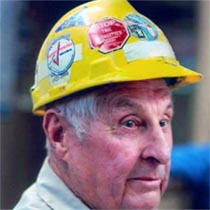 Charlie Hampton (Hamp) Vest, age 95, of Check, lost his battle with cancer and left his earthly journey to continue on to his heavenly home on Tuesday, August 23, 2016.

Hamp served in the Navy during World War II as Boatswain’s Mate Second Class on the USS Castor. He was an active member of Crockett Springs United Methodist Church. His love for the Lord would find him serving as Sunday School Superintendent for many years, lifting his voice in song, or stirring apple butter. He was a member of both Masonic Lodge and Eastern Star.

His work as a construction worker spanned over a period of 75 years. In 1949 he began work with Albert Brothers using for the first time the “big machines”–rollers, pans and dozers. In 1955 he was a Superintendent for Wiley N. Jackson in Lee County overseeing construction of Keokee Dam. He remained working for Jackson until 1985 at which time he went to work for English Construction Company. He retired from English in 1988 and took small jobs with Bandy Construction and Salem Stone. In October 2014 he retired from Salem Stone at the age of 93. He was recognized by the Roanoke Times in a special article as a “Legendary Earth Mover” and was respected and loved by all who knew and worked with him.

Family will receive friends on Thursday, August 25, 2016 from 5 to 8 p.m. at Horne Funeral Home. The Funeral Service will be at Crockett Springs United Methodist Church in Shawsville on Friday, August 26, 2016, at 11 a.m., with Internment to follow at Piedmont Cemetery.

The family expresses many thanks for all the visits, cards and prayers during this time of illness. Special thanks to all his friends from Salem Stone Quarry, those working with him from Good Samaritan Hospice, especially Rhonda and Ashley, and Horne Funeral Service.