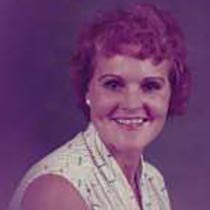 JoAnn Vaught, 83, of Ripplemead, departed this life Monday morning, July 31, 2017 at Carilion Giles Community Hospital in Pearisburg. Born in Glen Lyn on February 4, 1934, she was a daughter of the late Fred and Audessa White Thompson.

She was a member of First Christian Church in Pearisburg and also attended Edgewood United Methodist Church in Ripplemead, was for many years a school bus driver for Giles County , excelled as a beloved homemaker, and was a graduate of Narrows High School. She was preceded in death by her parents and three brothers Duane, Melvin, and Ralph Thompson.

She leaves to cherish her memory her husband of 64 years, Harold Lloyd Vaught; her sons and daughters-in-law Michael and Lynne Vaught of Chapel Hill, NC and Donald and Angela Vaught of Ripplemead; her grandchildren Audessa and Louis Vaught and Danielle and Kelsey Vaught; her brother and sister-in-law Gale and Kay Thompson of Fishersville; her sisters and brother-in-laws Neta and “Junior” Beasley of Rich Creek; Freda and Richard Smoot of Jonesborough,TN and Margaret and George Davis of Princeton, WV.

Funeral arrangements are being made at the Kendall Funeral Home in Pembroke. Online condolences may be sent by visiting kendallfuneralhome.com