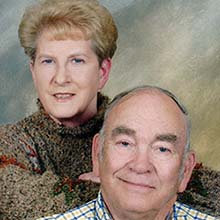 Betty Ann Thompson Van Hemert, 82, of Pearisburg, went to be with the Lord on Thursday, October 13, 2016 at the Warm Hearth Village in Blacksburg, Va. Mrs. Van Hemert was born on September 29, 1934 in Berton, Va. and was a daughter of the late John Floyd Thompson, Jr. and Mary Stella Lindsey.

Besides her parents, she was preceded in death by her husband, Charles Clifford Van Hemert, and one grandson, Justin Michael Van Hemert.She grew up near Eggleston, Va. and was a graduate of Eggleston High School. She went on to attend Radford College (now Radford University).

Betty was in the nursing program at Radford College when she met the love of her life, Charles Van Hemert. Charles was in the United States Air Force and over the many years they traveled the world together with their three children. They settled in Pearisburg in 1973 after Charles retired from the Air Force. Later she revived her nursing career by graduating from the LPN program at Giles High School and was a nurse at Giles Memorial Hospital for 25 years. Betty was a member of the First United Methodist Church in Pearisburg and was a past counselor of the UMYF.

She is survived by one daughter, Jana Lynn V. Brotherton and her husband, James of High Point, N.C.; two sons, John L. Van Hemert and his wife, Iva Jean of Pearisburg, Charles Clifford Van Hemert, Jr. and his wife, Dawn of Columbus, Ohio and seven grandchildren and one great granddaughter.

Funeral services will be conducted at 11 a.m. Friday, October 21, 2016 at the First United Methodist Church in Pearisburg with the Rev. Brian Burch officiating. A Committal service will follow in the Southwest Virginia Veterans Cemetery in Dublin at 1 p.m. The family will receive friends at the Givens Funeral Home in Pearisburg Wednesday, October 19, 2016 from 6 to 8 p.m.

Memorial donations may be made to the First United Methodist Church, 1101 Valleyview Dr., Pearisburg, VA 24134. Online condolences can be sent to the family at givensfuneralhome.com.