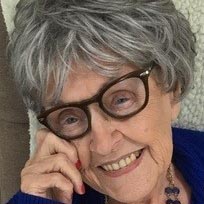 Shirley was born in Detroit, Michigan on August 13, 1926 to the late Harold and Gwendolyn Rowe. She graduated 1948 from Hillsdale College, Hillsdale, Michigan (B.A. Psychology and Teaching Certificate in German, Social Studies and English), and 1969 Radford University, Radford, Virginia (M.S. English and Guidance Counseling). She was a member of the Hillsdale College Tennis Team from 1945-48 and state doubles champion 1946-1947. As a member of Chi Omega sorority, she formed a close bond with twelve of her sorority sisters who traveled together yearly through many years of their lives.

Shirley began her teaching career in Farmington, Mich. teaching English and German and later in Virginia as a Title One Reading Specialist, English and Social Studies teacher, and Guidance Counselor in the Montgomery County Public Schools. Her dedication to her students earned her the lifelong respect and appreciation of her students; many of which continue to send letters of appreciation for her influence and guidance. Shirley retired in 1988 after 25 years teaching to join her husband, Bill, in Washington, D.C., where he represented the American Veterinarian Medical Association as a Congressional Liaison. She was a member of the Montgomery County Education Association, Virginia Education Association, National Education Association, Big Brother Big Sister Board Member, National Honor Society and the United States Civil Defense Corps, Air Warden 1944. Shirley received numerous awards and recognition for the impact she made within the organizations she served.

On June 15, 1950 Shirley married William “Bill” Robert Van Dresser and recently celebrated their 70th wedding anniversary. She was preceded in death by her husband. Shirley and Bill moved to Lake Oconee, Ga. in 1993.

Shirley loved people and was quick to step-up to help someone in need. In her honor, the family developed an endowed fund to help students in scholastic or financial need. We invite you to join us in celebrating her lifelong dedication to making a difference in students’ lives. Donations in memory of Shirley can be made to the Community Foundation of the New River Valley, THE SHIRLEY VAN DRESSER GUIDANCE FUND, https://cfnrv.org/giving/give-now/