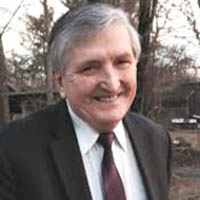 He was a member of Newbern Community Christian Church, and was retired from Radford Army Ammunition Plant and Lynchburg Foundry.

In addition to his parents, he was preceded in death by his wife, Blanche Large Valach. He is survived by one son, Michael Valach, and his wife Sharon of Tannersville, Pa: a brother; Ted Valach and his wife Brenda of Princeton, WV. He is also survived by a grandson, Mikey Valach and his wife Tracey of Snowshoe, WV: Great-granddaughters Ahna and Mia, a brother-in-law: James Large of Huntingtown, MD: an uncle, Joe and wife Patsy of Pocohontas, VA, along with his loving dogs; B.J. and Boarder.

Flowers or memorial may be made in George’s memory to the charity of your choice.

Special thanks to Carillon Hospice, Blue Ridge Cancer Center and the many neighbors in the community.