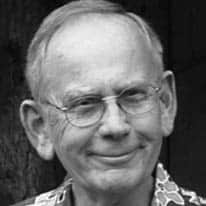 D. Kyle Umberger III was born on December 5, 1940 to Eleanor Good and David Kyle Umberger Jr. of Roanoke. He spent his early childhood in Old South West, attending Highland Park and Raleigh Court Schools and later graduating from Jefferson High School in 1958. Then he was off to Roanoke College, where he earned a Bachelor’s degree in Economics in 1962.

While at Roanoke, he thrived socially, becoming President of Sigma Chi fraternity, a place he found true brotherhood and forged many lifelong friendships. He also met Julia Franklin who became his wife in 1965. In time, he became a father, welcoming a son, Jason Carter, and two daughters, Emily Kyle and Leigh Hien.

He took pride in introducing his children to his colleagues and friends, and at such times, he insisted on solid eye contact and firm handshakes. He worked his entire adult life in banking and finance in Downtown Roanoke, where he seemed to know everyone and was shockingly good at recalling names and faces. In all those years, he never paid to park.

Kyle loved birds and could identify many by sight or song. He got plenty of birding practice on his beloved farm in Floyd County, an excellent spot to call turkeys. He enjoyed music of all sorts, especially bluegrass, and was known to play it loudly and sing along. He also performed with others throughout his life, in choirs at Jefferson High School and Roanoke College and later with the Roanoke Choral Society and the Brandon Oaks Balladeers. He gave his time and effort to Big Brothers, Big Sisters, The Ronald McDonald House, and to WVTF during its fund-drives.

He was always working through a book. Kyle didn’t shy away from a colorful batik shirt or a ball cap with a slightly naughty logo. He enjoyed showing off a “shortcut” through town and loved a perfectly seared scallop, HUBS peanuts, Fritos, black coffee, and a good IPA. He never carried a cell phone. Later in life, he was sustained by friends in his afternoon happy hour group.

The family will host a visitation at Oakey’s South Chapel on Monday, April 11, 2022, from 5 to 7 p.m. Additional plans are pending. In lieu of flowers, the family suggests donations to WVTF Public Radio.