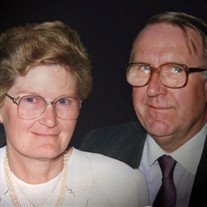 Helga Sylvia Ulfers, age 89, of Blacksburg, Virginia passed into eternity peacefully on February 1, 2021 a few days after seeing all seven of her grandchildren and her three sons. She was born in 1931 in Santiago, Chile to Erwin and Hermine Sievers. She married Horst Emil Ulfers in April 1960 who preceded her in death in 1997.

She was raised in Chile the second of three siblings. She received her Christian baptism on October 15 1932. She grew up as part of the German community in Chile. After moving to the USA with her beloved Horst, she returned regularly to Chile to visit her parents, her two brothers, Ronald and Gerold, and her dear friends and extended family. She had a very special place in her heart for the wonderful Chilean people, landscape and rugged-stunning coastline.

She is known as Helga, Ma, Mom, Oma and Helgita. She lived a healthy and vibrant life to the end, enjoying frequent outdoor walks. She was fluent in three languages (Spanish, German and English). She always appreciated beauty whether in art, music, or life itself; It wasn’t unusual to hear her say “That is a beautiful thing.” As a young woman, she studied (ceramics) abroad in Germany where she first met Horst. She was very creative as evidenced by the artwork hanging in so many of the homes of her extended family and friends – beautiful expressions of who she was. Her faith in Christ expressed itself in her simple love towards family and stranger. She would often volunteer in her community and at her church. People from at least four continents, including Africa, who visited her had very fond memories of her. Her kindness was an expression God’s gift to us all. When grandchildren visited her in Reston, they enjoyed playing games like Canasta and Mexican train dominos with her. She enjoyed guitar and piano until the end of her days. And she will always be known by those who visited her in Reston Virginia for her hospitality. In 2018 she moved to Showalter Center in Blacksburg, Virginia where she made new friends and continued to enjoy her amazing life.

After their marriage ceremony in Chile, Horst and Helga settled down in the United States to begin their new life together raising a family of three sons: Bernard, Robert and Detlef. In 1970 they moved the family from New Jersey to Reston, Virginia where she and Horst continued to enjoy a happy marriage. They were founding and active members of Good Shepherd Lutheran Church and members of The Reston Chorale. In 1989 they moved to the Netherlands for several years before returning to Virginia. After Horst’s passing in 1997, she continued to live in Reston with remarkable independence, always ready to welcome family and friends into her condo, where she was very much appreciated as a “great neighbor.” In 2014 her older brother Ronald Sievers preceded her in death.

Burial service shall be limited to immediate family with additional memorial services to be eventually held in Reston, Virginia and in Blacksburg, Virginia to celebrate her life with those who knew and loved her.

Memorial services will be open to all friends. Please leave your contact information with Robert “Bob” Ulfers if you are interested in receiving dates, locations and times for Helga’s memorial life celebrations which are yet to be scheduled for a safer time. He will contact you when those details are known. You may call him at 540 998 4800. Please refrain from sending flowers until memorial dates for Helga are announced.