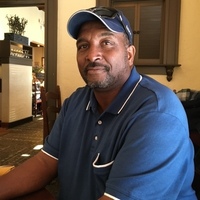 Alfonso Twine and Julia Marrs Twine united in marriage on August 27, 1988. They shared a life of love, laughs and were truly soul mates. Julia has many great and loving memories to get her through the tough days ahead.

They were blessed to be able to adopt their nephew, Jedidiah (Jett), who they love and consider their son. They were also blessed with two grandsons, James and Brandon Marrs.

Alfonso, better known to all as “Donnie”, worked for Aaron J. Conner, General Contractors, in Salem, VA for 37 years. He loved the early days when he was driving the company dump truck, bringing it home and cleaning it up, and later accepted the position as superintendent. He took his job very seriously, and as in anything he did, always put 100% into getting his job done right, and expected the same from those he worked with and those that worked for him on his crew.

Donnie was a member of First Baptist Elliston from a very young age, and later became a watch member at Shawsville Baptist Church, where Julia was a member.

Being the man that he was, he took on the project of helping build the fellowship hall at Shawsville Baptist, as well as the parking lot. He would always do whatever he could when someone needed something and was very willing to take on the project and make sure it was completed.

Although he was quiet, and somewhat shy, he never met a stranger.

He was an avid Dallas Cowboys fan, and loved riding motorcycles, from an early age. He and Julia were blessed to be able to take many trips on their Honda Goldwing, where they met many people who became friends.

He also loved the Blues, specifically B.B. King, and Elvis Presley, and occasionally would pull out his guitar and play and sing along to whatever song was playing. On Sunday mornings, he would sometimes even sing his version of gospel hymns for Julia, before going to church.

He was very proud of his son, who retired from the Air Force in January 2020, after 22 years of service. And since he moved back to the area last year, Donnie was looking forward to being able to ride with him since he has a motorcycle as well.

He is preceded in death by his parents Deacon Charles E. Twine Sr. and Deaconess Clara Mae Twine, and a brother, Rev. Charles Twine, Jr.

We will miss him greatly, but he fought a good fight, and was a devoted and loved husband, father, grandfather, son and brother.

A funeral service will be held Monday, March 15, 2021, 1:00PM at Serenity. There will be public viewing on Sunday, March 14, 2021 from 2PM to 5PM and the family will receive friends from 4PM-5PM on Sunday. Interment will be held in Sherwood Memorial Gardens.