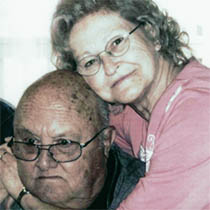 He was born in Pulaski Co., Va. on June 5, 1940 to the late Roy and Alice Turpin. He is also preceded in death by his sister, Katherine Niece, brothers, Alton Turpin and Meryle Turpin, two sons, Michael Allen Turpin and Calvin Darnell Turpin, sister-in-law, Margaret Turpin.

He was a longtime employee at Angles Grocery and Wades Supermarket. Mr. Turpin was a loving husband and father and will be dearly missed.

The family gives a special thank you to the hospice staff and Jennie Ayers and thank you to English Meadows for their care at the end.

Funeral Services will be conducted Tuesday, March 14, 2017 at 2:00 pm in the McCoy Funeral Home Chapel with the Rev. Frankie Graham officiating. Interment will follow in the Roselawn Memorial Gardens, Christiansburg. The family will receive friends from 1-2:00 pm Tuesday afternoon prior to the service at the McCoy Funeral Home 150 Country Club Dr. SW, Blacksburg.