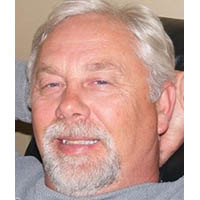 Spook was born and raised in East End of Radford, VA during the good ole days when kids ran the streets, played in the New River, played sports from sunrise to sunset, and experienced the good life growing up with his friends all across the city. He was a Radford High School graduate, class of 1975, Bobcat athlete and member of the 1972 state championship football team. He was a U.S. Navy Veteran aboard the guided missile cruiser USS Reeves (CG-24) from 1976-1979 stationed in Pearl Harbor, Hawaii and sailing the Pacific where he received his education and training to return to work at and retire from the Radford Army Ammunition Plant as Hercules Power Company and Alliant TechSystem Inc. (ATK) where he was the Lead – Class A, Master Refrigeration/HVAC Engineer, Master Electrician, and Master Gas Fitter. He also worked across the New River Valley on the side to take care of the many people in the community.

Spook was one of Radford’s finest. He was an avid Radford Bobcat student athlete supporter who loved Friday nights and supporting the Bobcats in every sport. Above all, he was the best Dad and PawPaw ever! He dedicated his life to his family where he provided a great, loving life built on a house full of love. He always made time for his children, always putting them first, teaching, coaching, and attending every activity they were all involved in and continued the tradition to be there for his grandchildren, playing a huge role to care for and be there for them while attending all of their activities as well. He made an impact on countless lives and current leaders of the New River Valley.

Spook was the best father, grandfather, friend, teacher, and coach who passed on his knowledge and love for life on to the next generations.

The family would like to thank Mindy, Morgan, Emily, and Megan of Medi Home Health and Hospice for their continued care and compassion.

The family will receive friends from 11:00 a.m. until 12:00 p.m. on Wednesday, June 9, 2021 at the Mullins Funeral Home in Radford, Virginia. Graveside services will follow at the Southwest Virginia Veterans Cemetery in Dublin, VA at 12:30 p.m.

The Turner family is in the care of Mullins Funeral Home & Crematory in Radford.