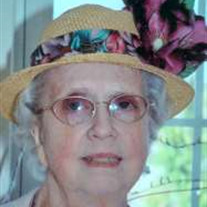 Ann Jones Turner, of Christiansburg, passed away on Tuesday, September 5, 2006. She was born in Montgomery County on December 29, 1927.

She was preceded in death by her faithful and caring husband, Jack; her parents, Rufus and Martha Elizabeth “Lizzy” Edwards Jones; brothers, Jim, Ward, Whimpy; and sister, Pearl Webb.

Special thanks to her sister-in-law, Opal Jones. Opal has been such a friend and sister for so many years. She was always available to spend her time with Momma.

Ann was a faithful member of St. Paul Methodist Church where she served many years as a Sunday School Secretary. She was a faithful contributor to their annual fund-raising bazaar and a former member of the Christiansburg Fire Department Ladies Auxiliary.

Ann has been fighting a courageous battle with cancer for the past 16 years. Her desire to defeat the disease was unmatched. Her strength and courage was and will remain an example to us all. Fighting for life was the greatest lesson she taught, never give up, never accept defeat, press on.

The family will receive friends from 6 until 8 p.m. on Thursday at the Horne Funeral Home, Christiansburg. Funeral services will be conducted at 2 p.m. on Friday, September 8, 2006 at St. Paul United Methodist Church. Interment will follow in Sunset Cemetery, Christiansburg. The Turner Family is being served by Horne Funeral Service, Christiansburg. Online condolences may be sent by visiting www.hornefuneralservice.com.