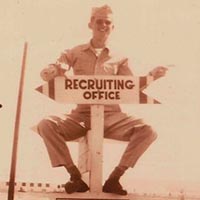 Billy James Turman, of Radford, passed away Thursday, January 14, 2016 in Veterans Victory House in Walterboro, S.C. where he had recently become a resident.

He was born July 30, 1929 in Welsh, W.Va. to Harley Emmett and Beulah Maude Johnson Turman. Bill was a 1946 graduate of Radford High School and served three years in the USAF, serving in Germany during the Berlin Airlift.

He graduated from Columbia Tech, Washington, D.C. in 1951 and was employed by RAAP from April 1951 to October 1984 as Draftsman and Engineer. He was a member of the Masons since 1956. Bill was a member of Fairlawn Presbyterian Church since 1950 and served as Deacon. He was very active in the service of the church and drew the plans for the manse that was built in 1965.

Bill is survived by his wife of 65 years and Radford High School sweetheart, Mildred Gilliland Turman. Bill is also survived by their three daughters: Donna and Allen Anderson; Dianna and Kent Koebke; and Pati Roane; as well as six grand-children and six great-grandchildren.

The Turman family is in the care of Mullins Funeral Home & Crematory in Radford.