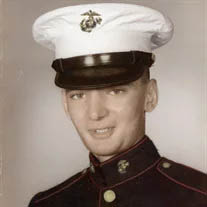 Paul Tsakires, 78, passed away on February 7, 2019 at his home in Christiansburg, VA, surrounded by close family members. Although, he had no children of his own, Paul was the patriarch of his family who loved him dearly.

He is survived by his two sisters, Mary Dritselis (Christiansburg, VA.) and Dena Bowers, Kirk (Charlottesville, VA); his nephews and nieces, Victor Dritselis (Blacksburg, VA), Stefani McNair, Erik (Arlington, VA), Nicole Coryell (Fredericksburg, VA), Andrew Bowers (Charlottesville, VA); as well as grandnieces and a grandnephew Alexa and Ian McNair, and Sophia and Brooke Coryell—to whom he was also a Godfather. He was predeceased by his parents Nicholas and Anastasia Tsakires, who emigrated to the United States from Thessaloniki, Greece.

Paul was born on November 18, 1940 in Bluefield, WV and graduated from Bluefield High School in 1958. After completing one year at West Virginia University, he joined the U.S. Marine Corps where he served four years as an electronics technician and was assigned to Marine Helicopter Squadron One responsible for the transport of Presidents JFK and LBJ. After being honorably discharged, he enrolled at Milwaukee School of Engineering in Milwaukee, WI where he obtained both an Associate of Applied Science (A.A.S.) and a Bachelor of Science (B.S.) degree in Electrical Engineering.

Upon graduating from school, Paul accepted a position with Dallas-based LTV Aerospace & Defense Company in August of 1969. Most of his work with LTV involved training U.S. Navy technicians to maintain the electronic systems of the A-7 Corsair aircraft. He also made long voyages aboard several aircraft carriers, including the USS Kitty Hawk, USS Eisenhower, and USS Independence. In the mid-1970’s, Paul was assigned for three years to the A-7H aircraft program in Greece. When the A-7 program ended in the late 1980’s, he was assigned to the B-2 Stealth Bomber development program and worked as a Reliability Engineer until his retirement in early 1999.

Following his retirement, he volunteered and worked for Arlington Charities in Arlington, TX for approximately 14 years. He moved to Christiansburg, VA in 2013 to be near family and became a loyal Hokies fan.

Paul was a wonderful mentor and uncle to his nieces and nephews and provided a unique perspective on the world from his many years of travel. He was an avid reader with a thirst for knowledge and was known by all who have met him as a kind, generous, and a humble man. Those left to cherish his memory will miss him greatly.

The family would like to give a very special thanks to Good Samaritan Hospice and his wonderful caregivers, Mary Ann Harris, Heather Annandale, and Zelma Wilson through Comfort Care Senior Homes, LLC. We are deeply grateful for their compassion, wisdom, and care.

Private memorial services will be held at Horne Funeral Home in Christiansburg, VA on February 10, 2019. In lieu of flowers, the family requests that donations be made in Paul’s name to Good Samaritan Hospice, NRV, 1160 Moose Drive, Christiansburg, VA 24073. Goodsamhospice.org.