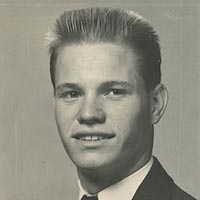 John Allen Trussler, Jr., 82, passed away at his home in Radford on Saturday, September 28, 2019. He is preceded in death by parents, John Allen Trussler Sr. and Anita Hartsock Trussler; mother, and daughter, Anita Lynn Newby.

The Trussler family is in the care of Mullins Funeral Home & Crematory in Radford, www.mullinsfuneralhome.com