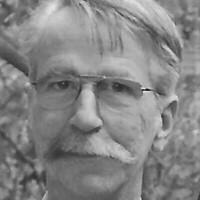 Patrick L. Trulove passed away Saturday, June 12, 2021, after a painful battle with lung cancer. He would have turned 67 on July 23.

Patrick grew up in Mill Valley, California, and loved his hometown. He kept up with the news there and with friends he had had since grade school. After graduation from Tamalpais in 1972, he moved to Oregon with his parents and attended trade school to become a printer operator. He also studied art and was skilled with pen and ink and oil, although never satisfied with his own work.

As an adult, he tried to live in Mill Valley, but it was too expensive, so he moved to Reno, where he worked for Kinkos for years, then moved east to the Charlotte, NC area and worked for Regulus as a machine operator and Shutterfly as a press operator. He updated his skills by earning A+ computer certification. He moved to Radford in 2016 to be closer to family and worked at Spectrum for 3 years and with Goodwill for the last year until he was too sick to work. He is grateful for the support and friendship of his colleagues at Goodwill, who were able to find a position for him where he would not have to stand and was still able to be productive, which was important to him.

Patrick enjoyed drinking beer and smoking while listening to blues, jazz, motown, and early rock, and reading history, especially the period between the wars. He was also a huge fan of movies, and collected W.C. Fields and classic war movies, among others.

He was a solitary individual, satisfied with his own company. But he kept up with old friends with colorful, detailed letters, hundreds of emails, and long telephone calls. And he enjoyed time with his favorite new friend, his sister’s sister-in-law, Suzanne Bowen of Pulaski.

Patrick is survived by his sister, Susan Trulove of Fairlawn, his brother Frank True and sister-in-law LaDonna Sepers of Radford, and many cousins far and wide, including his beloved cousin Dianne Walker of Kannappolis, NC.

Patrick’s family will take his ashes to Mill Valley, the home his heart never left.

If you knew Patrick, give him a thought. And if you smoke, quit!

The Trulove family is in the care of Mullins Funeral Home & Crematory. www.mullinsfuneralhome.com