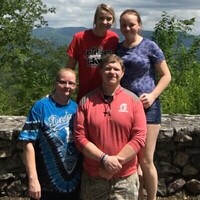 Sherri Kay Trenar, 48, of Pearisburg, VA., passed away on Thursday, April 29, 2021 at her home. Sherri was born on December 1, 1972 to Jerry R. Johnson and Carolyn Sue Hayes Cundiff. Sherri is preceded in death by her husbands, Randy Kemp and Joe Zieber.

Along with her parents, Sherri is survived by her husband, Charles Trenar, her children, Marie Zeiber of Pearisburg, Hannah Kemp and Fiancé Zach Robertson of Pearisburg, and Christian Kemp of Pearisburg. She is also survived by her sister, Katrina Wills and husband Jody of Princeton, WV., her step-mother, Kaye Johnson, step-sister, Beth Harry Yopp of Dublin, and step-brother, Christian Harry of Atlanta, GA. and aunt, Crystal Neice.

A Memorial Service will be held on Sunday, May 2, 2021 at 2:00 P.M. at the Pearisburg First Church of God on Wenonah Ave. with Pastor Freddie Ward officiating. The family will receive friends at the church from 1:00 P.M. until time of services. A guestbook is available by visiting www.kendallfuneralhome.com. Kendall Funeral Home in Pembroke will be serving the family of Sherri K. Trenar.