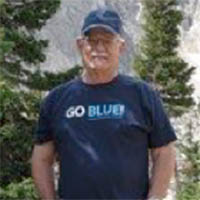 Robert James Tracy of Blacksburg, Virginia, died on January 6, 2019, at age 74. He was born in Washington, D.C., on October 2, 1944, to Helen Wellman Tracy and Robert Leo Tracy. He was educated in Alexandria, Virginia, at St. John’s College High School in Washington, and Amherst College in Massachusetts. He received a M.S. from Brown University and the Ph.D. in Geology from the University of Massachusetts at Amherst in 1975. After a post-doctoral Fellowship at Harvard, he taught at Yale from 1978 to 1986 and then assumed a Professorship at Virginia Tech. He was Chair of the Department of Geosciences from 2005 to 2008 and was Director of the Museum of Geosciences.

His field work was mostly in Western New England, and early in his career he spent a lot of time in the Scottish Highlands, but anywhere there were mountains (or good trout streams) he found something of interest.

Despite an initial blind date that didn’t go so well, he began dating Patricia Juneau from neighboring Smith College in the fall of 1966, and they were married in May of 1969. After a year at the University of Wyoming (he was a graduate student, she was an office secretary), they returned to the Connecticut Valley and both entered graduate school at the University of Massachusetts. Bob finished in 1975 and they moved to the Boston area for his post-doc; Pat left campus with a grant to finish her dissertation in History. In 1978, they embarked on jobs at Yale and Williams College, which involved a lot of 3-hour car trips. In 1986, Bob took a position at Virginia Tech and Blacksburg became ‘home base,’ though Pat continued to teach at Williams until the end of 1999 (with a brief trial of work at VT herself, from mid-1989 to mid-1991).

Once they were settled together in Blacksburg, Pat became a real estate agent and life took on a calm rhythm. There were lots of trips to Western Europe (not always in search of vineyards, though that was usually on the itinerary), and some to the American West. They especially loved Vancouver Island and the Willamette Valley. When a giant fracked-gas pipeline was announced to run across Appalachia through the side yard of their house, Bob and Pat started to think of moving away and made serious plans to move to Loveland, Colorado (only coincidentally near his favorite fishing place, the Cache la Poudre River), but drew back from leaving the house they loved (eventually two miles distant from the pipeline) and the network of friends that enriched their lives. So they really felt settled in Blacksburg, and hoped for many more years of quiet times with their cats, their gardens, and hobbies (she knitted and wove, he cooked and built ship models and was starting on woodworking) and a little travel. Bob was even making preparations to start phased retirement at the university.

If you knew Bob well, you will understand that he really “died with his boots on” – not his field boots, but his chef’s clogs. On the last day in which he was relatively pain-free, he cooked a big roast beef (Pat helped) for a small party of young people who were his favorite colleagues at VT. He pulled a very special bottle of Burgundy out of the cellar, and though he couldn’t manage to eat much and had only a sip of the wine (he’d been very scrupulous about giving up alcohol as soon as he learned he had liver failure), he enjoyed the company. The picture of Bob at the head of his table is one that the other participants will hold dear.

Bob’s final illness began with a surprise diagnosis of liver cancer in January 2018, and he was shortly thereafter enrolled on the waiting list for a transplant at the University of Virginia Medical Center. He enjoyed good health until November, but then the symptoms came and got progressively worse. He was fortunate that the experience of pain came only after Christmas, and after a difficult week in the hospital at UVA he was returned home to Hospice services and the care of family and friends. His death was peaceful, and all of his intentions for what came thereafter have been followed.

Besides his wife Patricia, he leaves his brother William Tracy and his wife Donna of Springfield, Virginia, his sister Betsy Pankey and her husband Joe of Falls Church, Virginia, as well as one niece and one nephew and their children.

There will be no funeral, but a private commemorative gathering will be held in the spring. The family would prefer no flowers be sent, but any memorial contributions to an environmental organization such as the Sierra Club would be appreciated. The Department of Geosciences at Virginia Tech will be establishing a student-research fund to commemorate Bob’s service, and contributions to that should be discussed with the Head of the Department. Contact: https://geos.vt.edu, phone 540-231-6521.