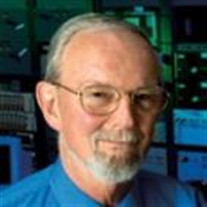 Professor James Thorp passed away on May 2, 2018 in Blacksburg, Virginia. He was predeceased by his son, Jeffrey Thorp, and is survived by his wife Jane Thorp, his daughter Betsy VanAlstyne (William), his son Gregory Thorp, step-daughter Erica Shoemaker (David) and grandchildren, Alex Bruce, Kelsey Bruce and Emma Lamoureux. He will be missed by many people in the Electric Power Industry to which he contributed so many brilliant ideas.

He was born on February 7, 1937 in Kansas City, Missouri. After his high school education, he joined Cornell University from which he received his Bachelor’s, Master’s, and Ph. D. degrees. He stayed at Cornell University as a faculty member, eventually rising to the position of Director of the School of Electrical Engineering. His tenure at Cornell saw the development of an advanced program in all branches of Electrical Engineering, as well as the assembly in Cornell of faculty well recognized for their contributions to various fields of Electrical Engineering. The graduate students of Prof. Thorp and his colleagues are making contributions to their fields which attest to the training they have received at Cornell.

Prof. Thorp joined AEP Service Corp. in New York City on a sabbatical leave from Cornell in 1976. Very soon Prof. Thorp began making highly original contributions to this effort, an example of which is his work on the limitation on speed of protection devices induced by the noise in the signals available to the protection tasks. The importance of this contribution is well recognized in the industry and provided us a guide as to what we should aim for in our research. At about this time Dr. Thorp joined the IEEE Power System Relaying Committee, as well as CIGRE. These organizations were heavily involved in conducting front line research in all aspects of computer applications in Power Systems. Also, at this time Prof. Thorp and his students began a collaboration with faculty and students in Virginia Tech. He was a principal contributor to the development of Phasor Measurement Units (PMUs) which have been recognized by the electric utility industries around the world as the modern measurement system capable of providing advanced control, monitoring, and protection of power grids. Prof. Thorp’s contributions have been well recognized by his colleagues in the scientific community by bestowing many honors on him over the years. He became a Fellow of IEEE in 1989, a member of the National Academy of Engineering in 1996, and he jointly received the Franklin Medal in Electrical Engineering in 2008.

Virginia Tech ECE Department was very fortunate in having him join them as their Department Head where he continued his research with their Power Engineering Team. He became Emeritus faculty member and continued to work with graduate students and his colleagues at Virginia Tech.

He has been a towering figure in Power Engineering Research community with many very significant papers and books to his credit. To his students and colleagues, he was a great mentor that make them better professionals and better persons. He will be sorely missed.

His Memorial Service will be held on Saturday, July 28 in Ithaca, NY.