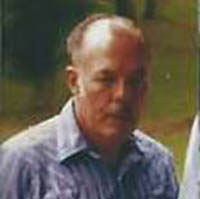 Paul Edward Thornhill “Bud”, 79, of Pembroke, departed this life Thursday evening, October 16, 2014 at Heritage Hall in Rich Creek after a long illness. Born in Pearisburg on October 23, 1934, he was a son of the late Paul C. and Gertrude Perkins Thornhill.

He was retired from the Celanese Plant at Narrows, and had previously worked at Electro-Tec in Blacksburg and as a cook in hospitals.

He leaves to cherish his memory his devoted wife Becky Higginbotham Thornhill; his son Kenneth Thornhill of Wagram, NC; his daughter and son-in-law Vickie and Michael Hodge of Narrows; his grandchildren Matthew and Jennifer Hodge, Jennifer and Curtis Jones; his great-grandchildren Marlei and Miah Poore, Christian and Jordan Jones his brothers and sisters-in-law Roy and Shirley Thornhill of Pearisburg, Gary and Linda Thornhill of Pearisburg; his sisters and brothers-in-law Leatha and Donald Jones of Pembroke, Ann T. Suttle of Pembroke; his brother-in-law and his wife Lynne and Margaret Higginbotham, his sisters-in-law Pam Higginbotham and Frances Thornhill; and special kitty Maltie.

Funeral services will be conducted Sunday at 2:00 pm in the Kendall Funeral Home, 605 Snidow St., Pembroke with burial following in Birchlawn Burial Park in Pearisburg. The family will receive friends at the funeral home Saturday evening from 6 to 8 pm.

In lieu of flowers the family suggests that contributions be made to Pembroke First United Methodist Church Building Fund.