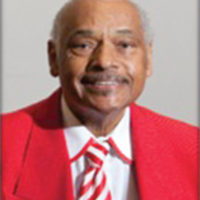 Ronald (Ron) Lee Thompson was born February 20, 1940, in Radford, Virginia, and grew up in New River, Virginia. He was the oldest child of the late Matthew Percell Thompson and Mary Louise Sheffey Thompson. Ron passed away on May 22, 2020 at Sentara Northern Virginia Medical Center in Woodbridge, Virginia.

Ron was baptized and accepted the Lord and Savior Jesus Christ as his personal savior at an early age. He remained active in worship and church service all of his life.

He was educated in the public schools in Virginia and was an outstanding athlete in high school where he played football, basketball, and baseball at Christianburg Industrial Institute (CII) in Cambria, Virginia. He went on to be one of the star football players at Virginia State College (University) where he received his bachelor’s degree in health and physical education.

Just before he began his career in education, Ron married Joyce Slaughter of Pulaski, Virginia, and to this union, a daughter, Charita Joynal, was born.

He was a dedicated member of the Dale City Lions Club for many years. In 2004 he was appointed as the Regular Neabsco Magisterial District Representative to the Solid Waste Management Citizens Advisory Board. Ron served in this position until 2008.

In addition to his daughter, Charita Joynal; one brother, Thomas Percell Thompson, and one sister-in-law, Maurica Thompson, preceded him in death.

Ron’s memory is cherished by a host of nieces, nephews, family members, Kappa Alpha Psi fraternity brothers, community servants, and friends who loved him dearly. He also leaves to mourn one of his most dedicated former students and mentee, Steve Webb. His presence will be greatly missed by all.

A memorial service will be held at a later date. Contributions in Ron’s honor may be made to Sentara Northern Virginia Medical Center in Woodbridge—Attention: Coronavirus Fund.