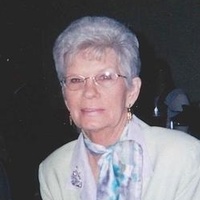 Survivors include her son and daughter-in-law, Jesse and Janet Thompson of Dublin, Va.; daughters and son-in-law, Donna and John Lage of Lancaster, S.C. and Robin Reinecke of Poppy, Pa.; grandchildren, Jessica and Samantha Thompson, Steven Zwicker, Mike and Nicholas Green, John, Jeffery and Tennille Lage, Kellie and Stephanie Uhl, and Matt Guthrie; two great-grandchildren, Noah and Jionni; sisters and brother-in-law, Alma Reed of Rich Creek, Va., and Carol and Oakie Thorne of Pearisburg, Va.; brother and sister-in-law, Jack and Kathy Meadows of Pulaski, Va.; a host of several nieces and nephews who loved their “Aunt Jeanie” dearly; and numerous other relatives and friends.

Funeral services will be held at 7 p.m. on Thursday, July 23, 2015 at the Mullins Funeral Home in Radford, Va. with Rev. Tony Reed officiating. The family will receive friends from 5 until 7 p.m. prior to the service. Interment will be at a later date in Arlington National Cemetery.

In lieu of flowers, the family requests that contributions be made to the American Cancer Society in Boyd Jesse Thompson’s name.

The Thompson family is in the care of Mullins Funeral Home & Crematory in Radford. www.mullinsfuneralhome.com