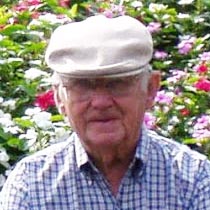 Jack Wayne Thompson, 90, of Floyd, passed away Sunday, July 9, 2017. He was preceded in death by his parents, Walter Van and Iva Ora Thompson; brother, Hillard Thompson.

Jack was most proud of taking care of his mother and father. He was a good neighbor and friend, gladly lending a hand to young and old throughout his life. Jack will be remembered most for a smile on his face and never meeting a stranger.

Funeral service will be held at Noon, Tuesday, July 11, 2017 at Maberry Funeral Home with Rev. Murray Agee officiating with interment in the Thompson Family Cemetery. Family will receive friends from 11 to 12 prior to the service.

In lieu of flowers donations can be made to Payner Creek Baptist Church or Floyd County Rescue Squad.