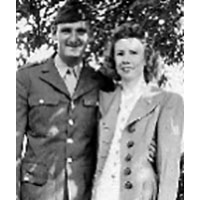 Helen Mullins Thompson, of Pearisburg, passed away on Friday, December 24, 2010, at age 90. She was born in Narrows on November 18, 1920 and was the daughter of the late Jesse J. and Martha Jane Lewis Mullins.

In addition to her mother and father, she was preceded in death by two sisters, Pauline Mullins and Beatrice Woolwine; and two brothers, Paul Mullins and Robia Mullins.

For many years, she was a member of the First United Methodist Church of Pearisburg and was active in the women’s fellowship.

She is survived by her husband of 70 years, Edwin Thompson of Pearisburg; her daughter, Rhonda Thompson Hulley, and son-in-law, Paul Hulley, both of Clifton, Virginia, and their three children, Martha Hulley, Meredith Hulley, and John Hulley; two sisters, Ruth Burleson of Ft. Thomas, Kentucky, and Aletta LaCarter of Columbia, South Carolina; a brother, Roger “Butch” Mullins of Pearisburg; and many nieces and nephews, including a special niece, Cheryl Woolwine of Narrows.

Funeral services will be held Tuesday, December 28, 2010 at 11 a.m. at First United Methodist Church in Pearisburg with the Rev. Dr. Fred Austin officiating. Interment will follow in Birchlawn Abbey in Pearisburg. The family will receive friends at Riffe’s Funeral Service in Narrows Monday from 6 to 8 p.m.

Riffe’s Funeral Service in Narrows is serving the Thompson family. Online condolence messages to the family can be sent to www.riffes.com.