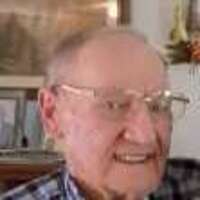 Charles Lee (Charlie) Thompson, 84, of Pembroke, departed this life Monday morning, May 9, 2016, at his home. Born in Pulaski on November 28, 1931, he was a son of the late Charles Reese and Thula Mae Buckner Thompson.

Until his retirement he was a truck driver. Charlie was proud to have served with the U S Army in the Korean War (1950-1953) and received the Korean Service Medal with two battle stars, the good conduct medal and sharp shooter medal. He was a faithful and devoted member of New River Valley Family Worship Center (Assembly of God) at Pearisburg serving on the official board, a blessing to all who knew him. He was preceded in death by his brother Millard Thompson, his sisters Anna Bell Lang, Ella Mae Dowdy, and Betty Lou Smith.

Funeral services will be conducted Friday, May 13, 2016, at 1:00 pm in the Kendall Funeral Home, 605 Snidow St., Pembroke with Pastor Mark Sachs officiating. Burial will follow in Roselawn Memorial Gardens in Christiansburg. The family will receive friends at the funeral home two hours before the services. Online condolences may be sent by visiting kendallfuneralhome.com